ASAP, the environmental stewardship initiative between ADRA-UK, ADRA Afro Region and the Scottish Mission of the Seventh-day Adventist Church (SM), held its launch on 9th November.

When asked how about the impact of climate change on people around the world, Michael Peach, Senior Co-ordinator Network Emergency Preparedness at ADRA International, said, ‘Each year ADRA responds to more than a 100 hundred ‘natural’ disaster around the world. That’s more than 2 a week’. He continued by giving an example of the Philippines, ‘who had 11 natural disasters last year – flood, fires, and hurricanes’.

Developing countries are often the hardest hit by climate change. ‘The developing world is characterised by low income per capita, mass poverty, rapid population growth… and excessive dependence on agricultural – more than 60% of these populations depend on agricultural’, said Zivayi Nengomasha, Director of Programmes and Planning for the Afro Regional Office. She continued by stating that agriculture is a climate sensitive activity and is exacerbated by inadequate infrastructures, low productivity, conflict and disease ‘not just Covid, but malaria and HIV/Aids’. The Young People Empowerment Project (YEP) in the region provides training for young people in environmental protection.

Environmental protection is a key element of the work that the Scottish Mission seeks to undertake under the ASAP initiative. The ‘starting point’ as described by Paul Tompkins, retired pastor, is to ‘recycle, remodel, reduce, reuse… and restraint’ in their efforts to reduce the effects of CO2 emissions on the environment. Over the next year, in partnering with the AFRO, the Scottish Mission will encourage its young people to be engaged in the ASAP environmental initiative by strategically and practically tackle climate change while raising awareness of its effects on the environment and their responsibility as Christian stewards.

‘The world needs urgent action, innovative solutions and faith stewards, ‘said Michael Kruger, President of ADRA International, ‘That’s why I am so excited about this (ASAP) project… which is not only an environmental initiative but an advocacy partnership. 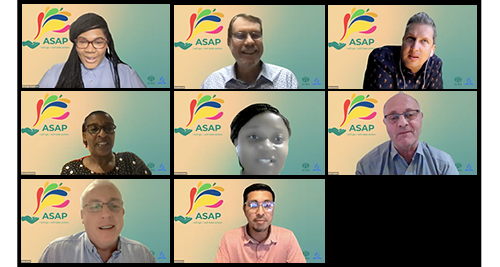 If you would like to learn more about the ASAP environmental launch, you can watch the video here.